So as promised, now that I finally have a few minutes, I’m going to dump a little bit about the weekend hack project.

The ‘thing’ we built is called “Game Time” (though we are hosting it at http://gametimeplay.com – because that was one of the many domains I already owned).

Anyway, here’s the overview straight from the 'about us’ in the app:

Game Time Play is a simple app designed to make sure you’ve always got a game to play, and once you’ve settled on a game, a simple way to keep score - forever.

Games and game details are user submitted, but quality checked and approved by our service administrators before becoming available to everyone.

And here’s a screenshot showing the results from clicking the 'random’ button: 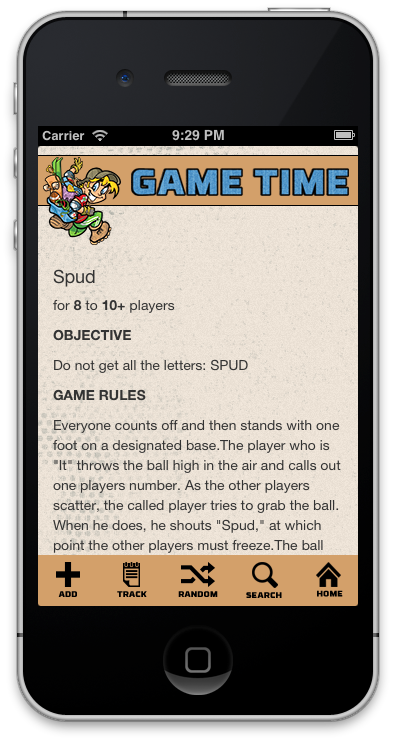 Our team was made up of myself and Mike Tsai (who also works with me at PubGears).

I found out about the hackathon last Monday, and pitched Mike on joining me for the fun Tuesday.

Initially I had two ideas I was thinking about doing, one was a simple app to address the parents “Go outside and play command” and the kids responding with “What should I play?”. The other was something I was calling “Me vs. You” and was just going to be a simple way to log/track scores between friends for pickup games.

When I pitched these two ideas to Mike, his response was “could we do both?”…I thought it might be ambitious, but it really made a lot of sense and, really, would be a much better overall app…so that’s what we decided we would do.

The rules posted on the hackathon site said that you could come prepared with a team, an idea, wireframes, and other assets…but they didn’t want you to have any pre-existing code. So that is basically what we got together in prep. for the weekend (everything but code).

This meant that, at the event, I needed to code up:

1. The web service (create account, sign in, suggest a game, provide a random game, search for a game, and display details of a given game)

2. A *very* basic admin system that would list out suggested games, let us add/edit the details of games, and adjust game status (suggested, approved, denied).

3. Scripts to index, and rebuild the index on demand, for the search (which btw, is *crazy* powerful – and something we’ll expand details on down the road)

4. The actual mobile app (which included a few 'extra’ features I didn’t really mention above like the ability to favorite games, sum scores in competitions, etc. etc. etc.).

We also thought that it was pretty important to seed the system with as many high-quality, and diverse, games as we could think of and find (and Mike – 'the content machine’ – was able to seed our system with close to 100 games over the weekend).

So while the basic description, and overall concept, is pretty short and simple to grep (part of what we loved about it in the 1st place)…it was actually quite an ambitious project to try and accomplish in just over 24 hours of work.

In the end, we accomplished all the high-level things on our list, and only had to compromise on a few small 'nice to have but not critical’ things (that we will address/fix/complete over the next few days before officially putting the app into the iPhone and Android stores).

And for all that, we officially landed ’Overall Runner Up’…losing out to Zap.

What does 'Overall Runner Up’ actually get us? Well, no money, services, or prizes…but it does put an extra big chip on my shoulder (not that it needed to be any bigger).

Of course we went into the weekend knowing that 'winning’ was a long shot…and our motivation and intent was all about building something useful, something real that we would be putting into the app stores, and something with as much 'real’ potential as possible.

I think we accomplished that – and we are both very happy about that…and we’ve already got a lot of ideas and energy to push this way beyond our initial goals!